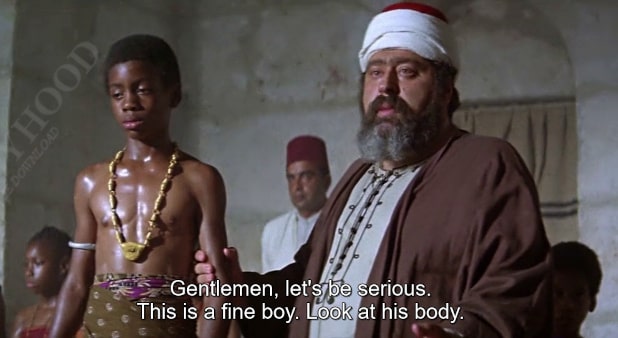 Dr. Anansa Linderby (Beverly Johnson) is kidnapped in a medical mission in Africa by a slave trader. From this moment, her husband will do anything to recover her and to punish the bad guys, but that will be not an easy task.

Beverly Johnson and Michael Caine as an interracial marriage of doctors try to help some African kids when the woman is abducted by a ruthless slave hunter (Peter Ustinov). Seeing that the local officials are not too willing to do anything about it, Caine decides to take the justice into his own hands and starts chasing Ustinov across the vast deserts of Maghreb.

Despite all the warnings, not that bad movie. The pace is somewhat slow, and the acting somewhat absent (though both Malik and Ustinov try to do their best), but generally, an acceptable filler on a rainy afternoon. The high points are the shots of North African desert and the Omar Shariff’s short appearance.

Beverly Johnson is pretty chick, but she’s seen only periodically (still she has one scene of full frontal nudity, although very brief). And the grimy subject definitely deserved a better treatment. All in all, not a definitely bad movie; just nothing really memorable, exceptional and shining here.