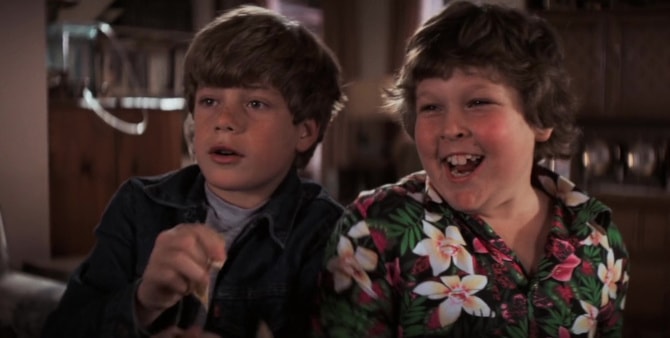 Mikey and his friends have always wanted to go on an adventure. One night they are all in Mikey’s attic and Mikey stumbles across an old map. Mikey has always wanted to know if One-eyed Willy ever was a real person and now he might. They set off and later realize that they have to go through the evil Mama Fratelli’s restaurant to get to a secret passage to the caves. As they try to get into the caves Mama Fratelli catches Chuck and he is left behind. He then meets Sloth one of Mama Fratelli’s sons with a messed up face. He befriends Sloth. Meanwhile Mama Fratelli and her sons are trying to get to the treasure too. Will the kids make it there before Mama Fratelli does? Will Chuck ever get out of her basement?

Anyone who grew up in the 80’s will list the Goonies as one of their favourite films, or at least look back at it with a misty eye.

It had everthing you could want, thrills, spills, pirates, booty, adventure, freaks and bad guys. I just wanted to be a Goonie or go on a Goonie style adventure. Even the place where they lived was cool. A big old house in a picturesque bay town. You don’t get houses like that in England. The only interesting thing you would have found in my loft would have been a dead pidgeon.

Then there were the Goonies themselves who just seemed so cool. Data’s gadgets and smart mouthed ..erm.. Mouth.

We are first introduced to them one by one in the fantastic introductory sequence. The bad guys of the piece, the Fratellis, organise a jailbreak in a huge 4×4. In the process of doing so they speed past every member of the Goonies, introducing their character traits. Then they all get together at the leader Mikies house and just doss around for a while feeling sorry for themselves, because a property magnate wants to but there little town and turn it into a country club (although the bay looks like it would make a poor golf course, but hey). So this is the Goonies last day together and they have to do something about it. And don’t they just.

What follows is like a comedy Hardy Boys crossed with a game of Mousetrap. Some of the set pieces are genius (the pirate, One eyed Willie, had a penchant for elaborate traps to stop people pinching his booty) and the sets are equally inventive. The gang get themselves into various scrapes with the traps, or the Fratellis or both and somehow always come out on top.

Richard Donner’s direction is always brisk, the young actors performances are superb (specially the fantastic ‘Chunk’), the senior cast is very good and the dialogue is chock full of hilarious lines.

I must admit I look back at it through rose tinted glasses. I was in awe of it when I was a kid, and now when I watch it, it reminds me of my childhood and all the things that was great about it. I cant fault the Goonies, even now. I still believe it is the perfect kids film.

I am probably preaching to the converted, but if you havent seen the Goonies, go and buy it now! And if you don’t like it, what the hell is wrong with you!?!?!?