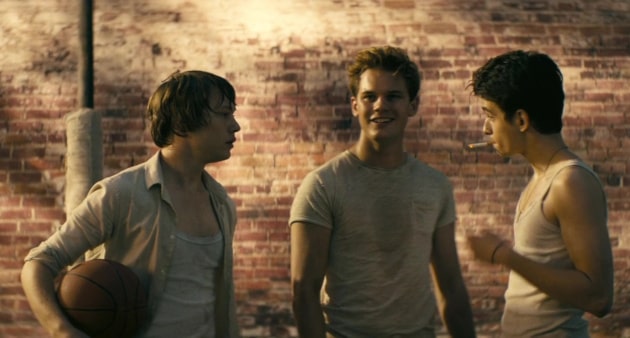 The plot revolves around the 1969 Stonewall Riots, the violent clash that kicked off the gay rights movement in New York City. The drama centers on Danny Winters, who flees to New York, leaving behind his sister. He finds his way to the Stonewall Inn, where he meets Trevor before catching the eye of Ed Murphy, manager of the Stonewall. He colludes with corrupt police and exploits homeless youth.

Motion Picture Rating (MPAA)
Rated R for sexual content, language throughout, some violence and drug use

Greetings again from the darkness. Dramatized versions of real life events are always a bit tricky, and hindsight often proves it’s best left to the documentary format. However, sometimes, a dramatized version helps us more easily relate to, and empathize with, those who were involved. That seems to be the approach taken by director Roland Emmerich in his re-telling of events so important to him and the LGBT movement  the Stonewall Riots of 1969.

The Stonewall Riots of June 1969 are often cited as the beginning of the Gay Liberation movement. Of course, there had been many previous clashes between gays and police, as discrimination was so extreme that these folks were labeled as mentally ill, and it was actually unlawful for gays to be hired for many jobs. On the streets of many big cities there existed a melting pot of minorities and the LGBT community. Many were young and homeless, and did whatever necessary to survive. So how best to tell this story? Director Emmerich and writer Jon Robin Baitz put blonde, white, Midwestern, pretty boy Danny (Jeremy Irvine, War Horse) front and center. How insulting to those involved.

To his credit, Emmerich does cast actors of various races to many roles, and he does seem to treat this as a sincere tribute or homage to those street kids who finally pushed back. Unfortunately, it’s these characters that seem to be the drag on the story. Despite such names as Queen Cong, Little Orphan Annie, Quiet Paul, and the inclusion of real life activists as Marsha P Johnson (Otoja Abit), Bob Kohler (Patrick Garrow)  and other key players like Ed Murphy (Ron Perlman) and Deputy Seymour Pine (Matt Craven)  the film comes off more like a staged musical sans music. The closest thing to a real character is Ray, played with aplomb by Jonny Beauchamp (“Penny Dreadful”).

Having the Columbia University-bound pretty white boy as the focus might make it easier for mainstream audiences to connect, but it skims over the real struggles going on at the time. We see Danny at home with his worried mother, observant little sister (Joey King), and macho football coach/father (David Gubitt). Everyone is uncomfortable over what is not being said, and the breaking point occurs when a tryst with the star quarterback becomes public knowledge. Just like that, Danny is booted from home (Indiana, not Kansas) and lands on the streets of New York. The comparisons to Dorothy (gay icon Judy Garland) and the Land of Oz are obvious, and repeated numerous times for those a bit slow on the take.

Christopher Street and the Stonewall Inn are the main settings. The mob involvement is noted, as is the desperation of the community, the use of flop houses, and the long-standing “quiet” demonstrations. Even the practice of gays trying to “fit in” to society – to prove they belong – by wearing suits and acting “normal” is addressed. The riots are reduced to a single evening in the movie, and of course, the pretty white boy gets to toss the first brick. As a ‘roots of the movement’ film, it’s hard to believe this film won’t create more anger and frustration than thanks and awareness. Fortunately, there are many exceptional books and yes, documentaries that provide a better perspective on the events that occurred more than 45 years ago. We do see the first Gay Liberation Parade held the following year in honor of the riots – a tradition that continues today. The closing credit sequence catches us up on the key activists, and even provides a startling statistic: 40% of today’s homeless youth are LGBT. One Response to Stonewall 2015