But he agrees to one last meeting with Wine, in an abandoned skyscraper under construction. It’s really just a dramatic set up that leaves Wine with a bleeding wound on his knee. Then, Wine hears a faint voice calling for help, leading him to find a mysterious stranger who is too weak to move. Wine tries to revive the guy with a convenience store pastry and bottled water, but the poor fellow can stomach neither. However, Wine’s wounded knee is of interest, and the weakened stranger slithers over, grabs a mouthful of kneecap and starts sucking blood.

Along with red-tinged eyes (the contact lens is clearly visible), it further turns out that the mysterious Mister Bloodsucker is also an amnesiac, and remembers neither his name nor his past. He’s a blank slate. Wine christens him Night, and Night takes a liking to the kid.

Soon, the stranger is installed in an apartment that Wine’s sugar-daddy other boyfriend Boy keeps for the two to meet in.

However, there remains the problem of Night’s weird dietary requirements. Various kinds of animal blood is presented in juice bottles for Night to try, but none are palatable.

So Wine sees no choice but to find a blood donor, and he kidnaps his old boyfriend Tee. When Night asks Wine where he got the blood, Wine explains it’s from a “buffalo”, which generated chuckles with a Saturday afternoon audience of middle-aged women at a Bang Kapi multiplex.

So here’s where Wine is heading down a morally dubious path. And it’s here where Red Wine in the Dark Night has parallels to another queer Thai feature film released this year, the mystery thriller The Blue Hour (Onthakan, อนธการ). But while The Blue Hour is heavy and solidly dramatic, with arthouse pretensions, Red Wine is lighter, reflecting its commercial aims as a widely released mainstream film.

Sex-wise, things are kept clean, with naughty bits covered up by strategically bunched-up bedsheets. The hottest it gets are the male-on-male liplocks and scenes of the boys in their skivvies, of which there are many.

This is a Tanwarin film, so there’s a lot of humor, with more chuckles coming as Wine tries to suss out what Night’s deal is. He’s not vampire, Night reasons, because he doesn’t have fangs. So he knows that much about life. But then he’s also sensitive to light.

And it’s a strange universe that Tanwarin has concocted out of a little corner of Bangkok, with a canalside path and tiny city park with a swing being one main location, aside from condo rooms. Lighting cues add to a spooky atmosphere, especially in the abandoned, under-construction skyscraper.

Certain things trigger Night’s faulty memory, such as the discovery of a guitar in a garbage pile. But as those memories come back, the pressure is piling on Wine.

Tee’s friends, a hilarious bunch of jocks, all with the same slicked-back ’50s hairstyle, running shorts and NBA practice jerseys, keep coming around to hassle Wine about the whereabouts of their pal. They don’t necessarily care that their best buddy is gay – that’s not the issue – they just want him returned.

And Wine’s slightly older businessman friend Boy (Krittachapon Thananara) keeps calling, wanting to meet up at the apartment, and he’s growing increasingly tired of the same old lame excuses Wine has about having to go “help my mother” or somesuch. I like how Boy’s ready to throw down at a moment’s notice, with a pair of handcuffs at the ready.

In the gay community, there has been much fuss over Fluke, a cult figure who is described by one fan as “sex on legs”. I don’t quite get the appeal, but then he’s not my type. But I recognize that Fluke is a fine, expressive actor, who fits the sought-after archetype of the vulnerable wisp of a leading man being cast in movies like this. Perhaps in another era, he would be Juliet to a more-masculine Romeo. 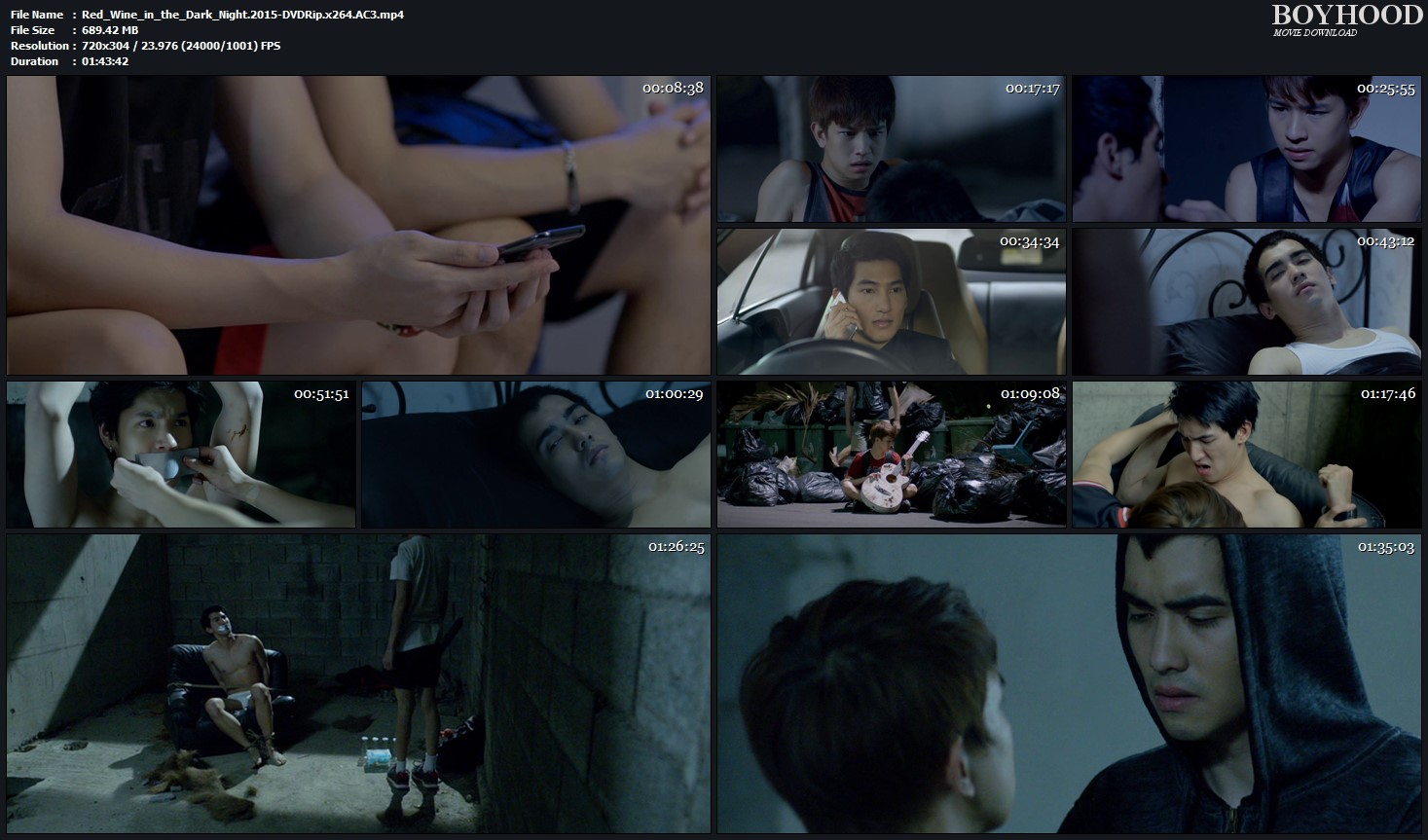 One Response to Red wine in the dark night 2015