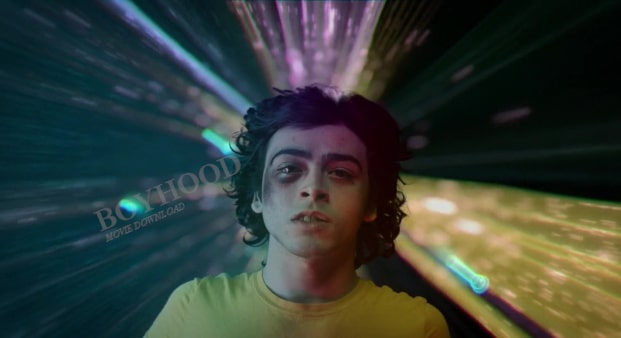 When a teenager finds himself caught in a glitchy-glitzy reality with his onscreen male idol, he does all he can to be possessed by this man and ignore the violent clues of how he got there.

Channel surfing through his TV into an alternative reality where the dream hunk from his favourite telly hunk embraces him with his muscular arms, lead actor/co-writer (with Morris Stuttard)/director Gem Deger plugs in his screen debut by closely working with cinematographer Cedric Larvoire to stylishly tune Demir onto a new reality.

Deger & Larvoire unleash melting, abrasive saturated neon colours being whipped across the screen, until bursting into a sinking fever dream Horror mood, as slippery panning shots reveal Demir’s fantasy to be turning into a nightmare.

Whilst displaying an impressive level of ambition for the first project he has ever done, Gem Deger gives a debut performance as Demir, which is sadly extremely grating, due to his gurning and off into the distance gaze always being placed at the centre of the screen, which squeezes his fellow cast members into the corner of the screen.

Dipping into a screen where Demir’s lust and desires can be fulfilled, the screenplay by Deger and Stuttard attempts to explore lust being a velvet glove of fantasy over horrific traumas Demir’s has suffered.

Attempting a twist ending which looks behind the mask of the dream lad and the horror Demir has attempted to cut himself from, the writers sadly block the ending from making a full impact,due to long, draining hazy conversations between Demir and dreamy hunk Andrew, which aim to wash-over as dream-logic, but get vomited up as a plodding mess over the playdurizm.