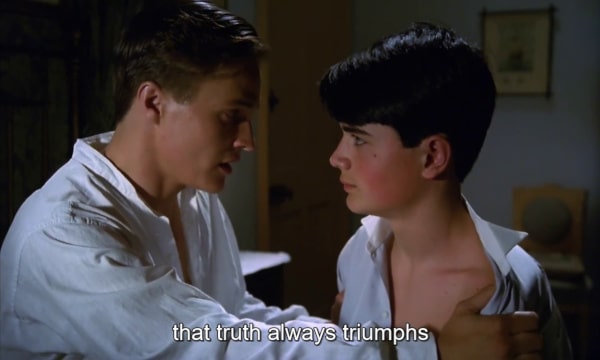 A sexually conflicted young man is hired to take care of two orphaned siblings in a remote seaside mansion, and soon realizes that the ghosts of two former servants are trying to possess the children.

A pretty rare screen adaptation of Henry James’ classic novel, from prolific Spanish director Eloy de la Inglesia. I really liked it a lot, but the only problem is that I couldn’t help but to compare it to “The Innocents”, which is of course a better film, and thus diminishing the impact as intended. Nevertheless, it’s a classy, atmospheric throw-back to slow-burning haunted house films of the 60’s, spiced up with an underlying gay subplot (The role of the governess is replaced by a troubled male tutor, whom the Miles character tries to seduce), thus giving even more empashis to James’ theme of sexual repression. The locations at the Spanish coast are simply gorgeous and lavishly photographed, and particularly reminded me of the seaside castles featured in Corman’s Poe films, although I’m not sure that was de Inglesia’s intention. Again on a visual note, the film makes great use of candle-light and natural lighting in some scenes, creating this strange, ethereal atmosphere that adds to the brooding Gothic tone of the piece. Speaking of which, I was surprised that the film actually managed to scare me, with a few scenes involving the servants’ ghosts that actually kept me from having a good night sleep. The acting is quite good too, specially the two child actors who play Miguel (the Miles character) and Flora respectively, who are just effortlessly creepy. Pedro Mari Sánchez, who plays the the tutor Roberto, is also quite good, although seeing him speaking some of the same lines as Deborah Kerr did in 1961 was rather amusing. Overall, a spooky Spanish gem that is highly recommended for fans of either James’ novel or “The Innocents”. It’s hard to find, but it’s worth it.