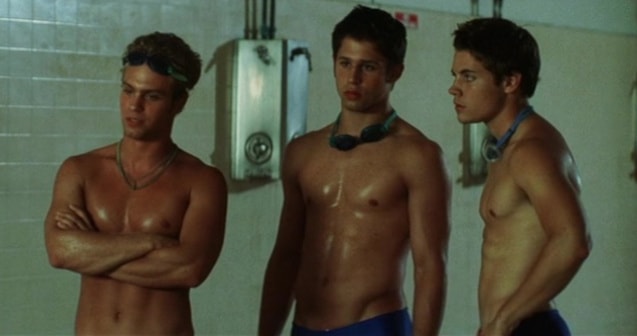 Common-type aquatic leeches grow to large size after feeding on steroid-laced blood of a number of college endurance swimmers, and then the nasty creatures lay siege to the entire campus for more.

Yes, I knew what I was getting into when I rented LEECHES! Yes, I know what kind of films Dave makes for Rapid Heart. Yes, I knew there would be non-stop guys-in-speedo scenes. And yes, I even knew this movie would be flawed.

So why did I see it?

Simple, I was on a swimteam back in the day and I thought: “What an interesting concept!”

Of course, all of the other thoughts in my head kept telling me “Stay away…stay away. You know what this is gonna turn out to be!” But I say to hell with it and rented it anyway.

All of what I thought did come true. Too many speedo shots, boring and obviously mechanical “leeches” and an ending so rushed and so dull I think I could have slapped one of the leeches on my and let it suck out my blood. Just to numb the pain of seeing this film.

Still, the fact of a swimteam taking on a “hord” of killer leeches was fun, funny and out of the norm!

Oh well…I am a sucker of b-movies and will be until my dying day. If they keep making them. I’ll keep watching them.