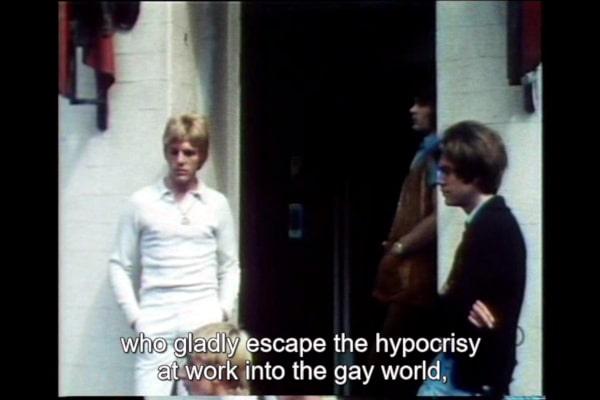 It Is Not the Homosexual Who Is Perverse But the Society in Which He Lives 1971
Nicht der Homosexuelle ist pervers, sondern die Situation, in der er lebt (original title)
1h 7min | Documentary, Drama | 24 November 1977 (USA)

Daniel, a young man from the provinces come to the city and moves from one gay subculture to the next. His adventures begin on the streets of Berlin, where the shy brunette Daniel meets the blonde Clemens, who invites him home for coffee and offers him a place to stay. Soon Daniel is living with Clemens and believes he has found the love of his life. The two try to imitate a bourgeois marriage and its lifestyle. But after four months of tedium, Daniel is cruised by a rich older man who entices him to move into his villa, where he encounters a group of older gays, pretentious in their appreciations of fine art and classical music, who fawn over him.

This movie is a kind of fictionalized documentary or perhaps it would be better to call it a cinematic essay. In either case, the movie follows the evolution of a young man named Daniel who arrives in Berlin in a rather “unspoiled” state and gradually trades in both his shyness and his sincerity to better feed his escalating appetite for excitement in the big-city gay scene. As we follow Daniel’s escapades, he is transformed into a jaded hedonist caught in his addiction to ever more exotic (read: campy) clothing and ever more depersonalized sexual experiences.

Scenes from Daniel’s life and the various milieus he frequents are accompanied by voiceovers that are sometimes narrations, and that sometimes represent dialogue. There is no synch sound and the movie never even tries to pretend that the sound was recorded together with the picture. Thus, this film is determinedly “low-fi” and has a crude and vibrant aesthetic that is well attuned to the subject matter it covers.

For most of the movie, the voiceovers are highly astringent — steeped in cynicism, bitterness and melancholy. Seen from today’s perspective after the tremendous cultural evolution that has occurred since 1971 with respect to gays and their acceptance in society this film often looks and sounds very dated indeed, but not so dated as many viewers might prefer to think. Many of the topics covered here with scathing honesty — the idolization of youth and marginalization of older gays; the materialism of gays; the competitiveness of gays; and the hypersexualization of gay “culture” with its tendency to cause isolation and loneliness — these basic themes are still quite operative in today’s supposedly modern gay world where the mainstream acceptance so ardently craved by some gays seems all but assured.

See this movie and get a wholly authentic taste of the witty, insightful and unhappy man who made it. This is a brilliant document, often highly entertaining when viewed in the proper spirit, and a valuable window not just on the dawn of the gay rights era but on the underside of today’s supposedly brave new gay world. 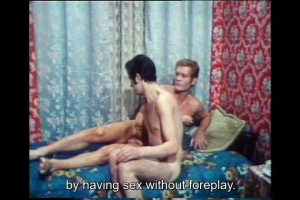 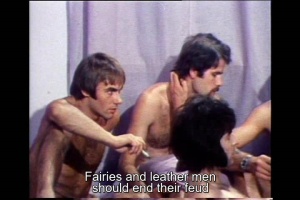