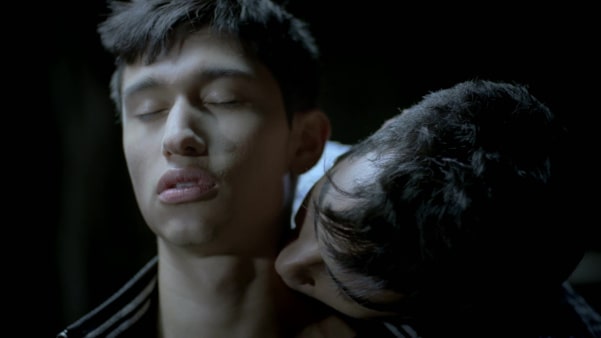 Emiliano looks at his life with the eyes of a film director, mixing the objective reality with the processes of the artistic creation. The story he is filming flounders with his daily life, until his world is trapped in the lens of his camera. Confused, always alone and in front of a screen, now become a transfigured reality, but at the same time a measurable, controllable and manipulable one, he listens in loop to a song: one of those songs you sing or repeat as a prayer and forcing you to remember, believe and convince yourself.

The movie comes off as a Mexican David Lynch lite production with a dollop of ‘artistic’ nudity and sex thrown in for good measure. The characters for the most part are unlikeable, using each other in their own self destructive ways, so much so that you end up feeling sorry for no-one, even the young dancer who is able to walk away having come to terms with the painfully brief yet passionate affair. The deliberate use of circular moving camera work clearly meant to evoke something but this viewer was left none the wiser. When employed, a movie within a movie usually has some sort of analogy to the real life characters experiences but here again I was left stumped and it felt forced in for no apparent reason but to be strange in and of itself. Lynchian this was not but tried so hard to be, a la Mullholland Drive.