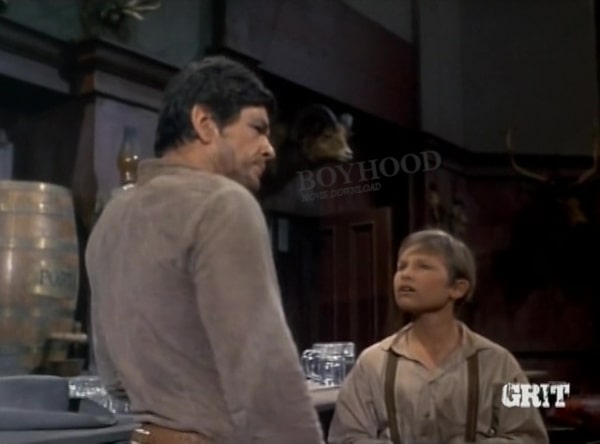 14-year-old Kurt Russell plays Jamie, an orphaned boy heading westward with a wagon train. Charles Bronson is a wagon scout Linc Murdock, who runs into difficulties when he meets old flame Maria (Susan Oliver), who is now married to corrupt lawman Rance Macklin (Jan Merlin). The jealous Macklin has Murdock arrested, but Maria frees him, permitting Murdock and Jamie to embark on a new adventure involving a “lost” gold mine.

Watchable Western programmer of the most elementary kind, this was actually culled from episodes of an obscure TV series THE TRAVELS OF JAMIE McPHEETERS. Charles Bronson is O.K. as the taciturn hero (though obviously far away from the mythic quality of his “Harmonica” character in Sergio Leone’s ONCE UPON A TIME IN THE WEST [1968], the masterpiece which belatedly shot him to stardom), Kurt Russell is the likable boy in his charge and Douglas Fowley plays an eccentric old prospector whom the latter befriends (eventually becoming his beneficiary).

The narrative presents a HIGH NOON (1952)-type situation where Bronson meets an old flame he believed dead and is then confronted by her husband (Bronson’s nemesis back in the day) and his two brothers. While the quality of the transfer on the budget DVD I watched left a lot to be desired (including several unnatural transitions betraying its modest TV origins), the film itself manages a couple of good action climaxes.