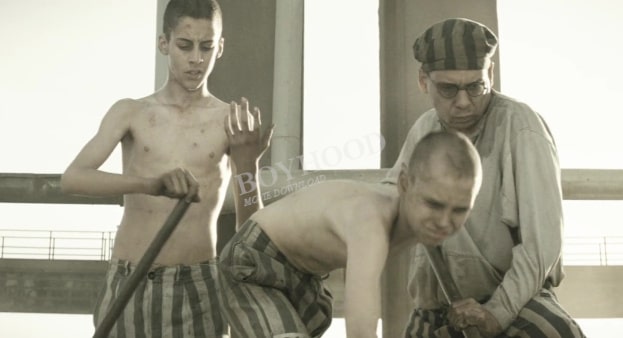 An Hungarian youth comes of age at Buchenwald during World War II. György Köves is 14, the son of a merchant who’s sent to a forced labor camp. After his father’s departure, György gets a job at a brickyard; his bus is stopped and its Jewish occupants sent to camps. There, György find camaraderie, suffering, cruelty, illness, and death. He hears advice on preserving one’s dignity and self-esteem. He discovers hatred. If he does survive and returns to Budapest, what will he find? What is natural; what is it to be a Jew? Sepia, black and white, and color alternate to shade the mood.

‘Fateless’ was a never-seen blockbuster in Hungary if we can use the term for Hungarian movies. It attracted so many viewers that no Hungarian film has done before and as it’s not surprising that a Holocaust-film like this divides the audience. Thousands of readers had fallen in love with Imre Kertész’s Nobel-prized novel, and expectations in this case are very high. However this film does NOT have to make any disappointment and opposite to some critics’ opinion it holds the same meaning the novel holds. Don’t forget that Kertész is the screenwriter too, it is his true story, a man’s who went through all these and kept the respect of life so could find happiness after and during this. He agreed this film’s value. The movie has some great actors, wonderful pictures and lots of very good, atmospheric scenes with very real memorable characters. The score is extremely beautiful how it’s natural if the composer is Ennio Morricone.

There are weaknesses too, of course, some dialogues, mainly in the beginning of the film are not natural (maybe it comes from Kertész’s newness in film-writing), it’ very disturbing as some weak acting in a few episodes. Marcell Nagy is not a bad choice for the leading role, he has the look and the power in his eyes but in speech he’s not convincing, it drops you out of the atmosphere sometimes but it won’t bother the not-Hungarian audience.

‘Fateless’ is an impressive European masterpiece, Hungary should be proud of it.