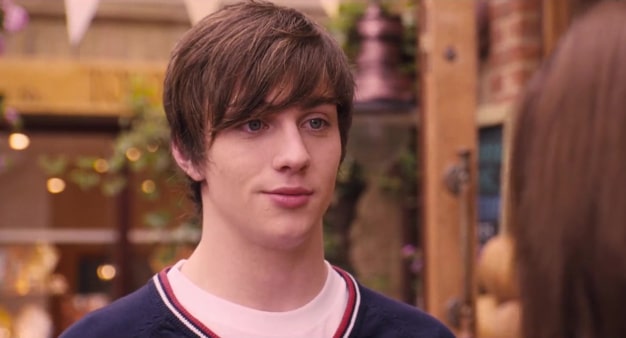 Angus the fluffy cat retains its dignity even in a crazy Eastbourne family, unlike them. Eldest daughter Georgia is completely besotted with ‘Stiff Dylans’ band hottie Robbie, who just moved in from London and helps run an organic groceries shop with his brother Tom, whom her best friend Jas has the hots for. Peter Dyer calls Georgia his best ever kissing-course pupil, but she ignores him and later the brothers’ other classmate Dave the Laugh. Robbie was considering to dump haughty Lindsay, but reconsiders given the immature brat’s apparent cruelty. Thus manipulative Georgia keeps changing her mind about a grand birthday party and her father’s career opportunities as engineer in New Zealand, while mother seems to flirt with hunky interior decorator Jem.

My daughter and I went to see this film last night with great anticipation as we have read the books. I know that the director is great having seen her previous work and I was looking forward to seeing how she and her co-writer had adapted the books for screen.

First off it is based on the both ‘Angus, Thongs and Full Frontal Snogging’ and ‘it’s okay, I’m wearing really big knickers’ there have been a few minor changes to make it work on film without Georgia sounding too whiny and to make the story flow better. It was a shame that we didn’t get to meet Sven and his awesome flares, but he was there disco dancing in the background and Georgia fans will know him when they see him.

From the moment it started we were engaged, the cinema was packed and during Georgia’s initial walk home we were howling with laughter and it just got better. (Did her feet move or did she glide?) The audience was a mixed bunch, a majority of teenage girls, a sprinkling of boys and a few of us “out of the stone age”, I don’t think that anybody disliked it. It got major reactions from all of the audience each finding humour in different places. There were a few sad ahhh’s when there was a sad looking ‘Dave the Laugh’, some misty eyes during a serious dressing down and laughter at Mum ogling Jem – or was that just me! anyhoo – both my daughter (16) and I (38) would pay to see it again. We highly recommend it but take a tissue with you, if not for the tears of laughter but for those misty eyes that may sneak up on you.

It gives you a warm feeling to be reminded what romance and love is, both from a younger and older point of view. Although I did say to my daughter on the way home that you are not incomplete if you are don’t have a partner, but it can be a great feeling when you are ready. But Georgia is written with a boyfriend goal in mind. Look out Sex God Georgia has a plan!