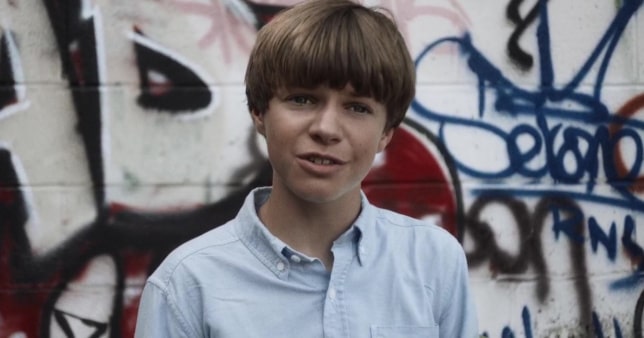 It’s 1984 and outside a small-town nightclub, a group of 8th graders gather, grappling with a spate of recent suicides, UFO sightings, their absentee parents, and each other.

Most of the characters are well drawn. The actors are young, and seem inexperienced, but that’s deceptive. They are not. We see plenty of experience in the subtle nuances and bashful sweetness of Shel (Tanner Flood), a boy with a shy smile who is central, if anybody is. He’s got a pack on his back. Why does he need all this stuff? He goes back and forth between his mom and stepdad and his real dad; maybe he lacks a sense of home. He’s carrying the daypack because he’s spending overnight with the hotshot of the group, the best athlete and artist, tall, handsome Brad (Oliver Gifford), who however reveals anger and frustration later. There’s wise-guy “rich” kid Dean (Nolan Lyons), and a nerd who talks computers, Peter (am McCarthy). On the fringe, dramatic, is the bad boy with problems who’s in therapy or juvie or something, Lanky (James Freedson-Jackson) whose refrain is “What! None o’ you faggots want to get high!? Lanky’s brother killed himself not too long ago. It’s left a mark on Lanky he hasn’t begun to deal with. On the side are a couple of current misfits, Kira (Ivy Miller), who reads about 21 shot in a Macdonald’s in a paper: her interest in the news is taken as weird. Next to her is James (Erich Schuett), whose pencil-drawing of the faces of everybody, which he tacks on the wall, is also taken as weird.