The Great Ecstasy of Robert Carmichael 2005 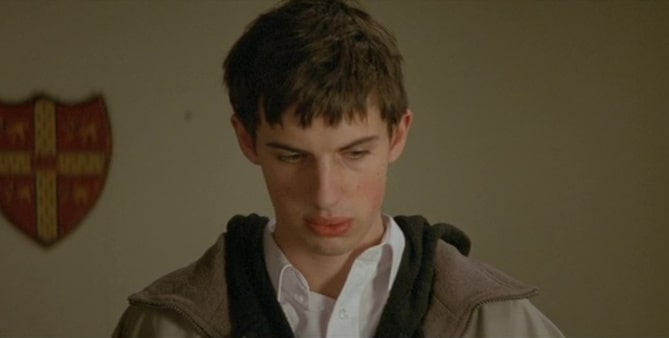 The Great Ecstasy of Robert Carmichael 2005

An introverted, socially awkward, middle-class youth, Robert Carmichael, is a talented cello player but is bored by his existence in the coastal town of Newhaven. He becomes associated with several other unsavory teenagers and is soon tempted into the use of hard drugs like cocaine and ecstasy. Robert initially does not take part in the rape of a teenage girl in a squalid flat with the gang, but later joins in another violent attack on a middle-aged couple, with the woman involved being viciously raped.

I am liberal. I have always taken pride in my ability to keep a certain intellectual clarity when confronted by a particularly provocative work of art. I love art – whether movies, paintings or novels – and I believe that art is not art unless it provokes some kind of reaction, positive or negative.

Yet I must confess that “the scene” at the end of this film pushed my own flexible limits of stomachability. I won’t describe the scene in any detail – you just have to see it yourself – but let me say that I have never, or may never again, be witness to such a finger-curlingly, teeth-clenchingly HORRIBLE act of violence on the big screen.

The visual presentation of the wine bottle moment was shocking enough, yet it was it’s complete unpremeditatedness, it’s coming like a knife out of a dark room, (even after the rape) that really threw me.

The film finished two hours ago and my head is still reeling. I will not attempt to rationalize or explain the morality or acceptability of such a closing scene: it is a purely subjective exercise, dependant on the viewer’s own values and tastes. This was a point made by the writer and director in the heated Q & A which followed. They refused in any way to give an answer to the most prescient question: WHY? And they’re right. The whole point is that the film, as a work of art, which, if flawed, I believe it is, does not answer questions but poses them. Questions not about society or the causes of violence, but about art itself. You cannot watch this film without having to deeply reconsider your understanding of the scope of the much-overused term “Art”.

Finally, I would like to say that it’s a great shame that the only thing people will talk about is the final scene. The rest of the film is a beautifully shot, clever, and above all, authentic take on life in a debilitated British seaside town, not unlike the town I grew up in. If it had somehow ended differently, I am quite sure it would now be receiving rave reviews from those liberal-minded critics who salivate at the mention of a gritty, British, class-driven drama.

But as it is, a lot of good stuff is about to be swallowed in the growing whirlwind of controversy, and, at best, the film will be consigned to ‘risque’ or ‘cult’ territory in our cultural estimations. A shame indeed. One Response to The Great Ecstasy of Robert Carmichael 2005