A nearly wordless visual narrative intercuts two main stories and a couple of minor ones. A woman, perhaps the Madonna, brings forth her baby to a crowd of intrusive paparazzi; she tries to flee them. Two men who are lovers marry and are arrested by the powers that be. The men are mocked and pilloried, tarred, feathered, and beaten. Loose in this contemporary world of electrical-power transmission lines is also Jesus. The elements, particularly fire and water, content with political power, which is intolerant and murderous.

One gets the impression that other reviewers on IMDb have never seen or appreciated Jarman’s other films, or any art film for that matter. This isn’t for the intellectually inert. One also wonders whether they’ve taken the time to watch this one more than once — its conflicted and dense, drawing on mutually contradictory sources for its symbolism, and attempting a synthesis or nexus.

The main themes are religion, love, oppression, family, and above all, time. Events and elements from every era of recorded human history co-exist together in one time and interact. While much of the film itself is done in the anxious, unsteady, rapid-moving style that Jarman came to be known for, other parts are filmed with graceful panoramic transitions. Throughout all the film, landscapes are replaced with artificial projections, perhaps to give the film an aura of unreality or allegory. It is at once both scripture and pornography, philosophy and nonsense, a gloomy warning and a hopeful swansong. I believe it to be one of Jarman’s most un-acknowledged films. Don’t let the harsh words of bad reviewers sway you against spending an evening absorbing this film — its mesmerizing. 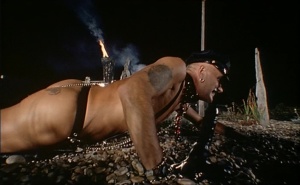 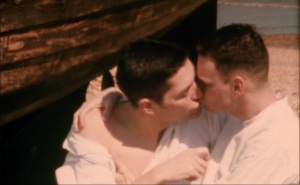 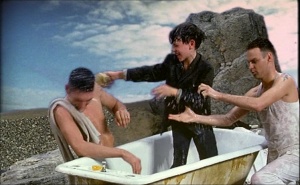 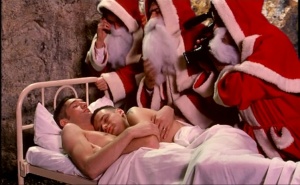