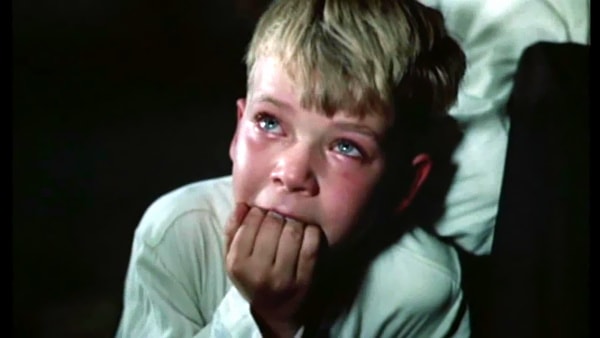 This film tells a story spanning three generations, from 1871 to 1945. After the farmer’s son, Gustav Wengler, returns from the Franco-German war in 1871, he goes to work in a precision mechanics and optical company. He soon becomes a master craftsman; he is loyal and devoted to this company and promises his director on his deathbed that his sons and grandchildren will also stand by the company. At last, the time comes for his talented grandson Paul to honor this promise and join the company. In the meantime, however, the company has gained a worldwide reputation and supports the Third Reich. Although Paul is skeptical about the Nazi leadership, he continues working for the company. When he sees the company destroyed during the war, old Gustav Wengler realizes his family is responsible for the turn the country has taken.

A young boy builds a raft to reach his mother in the land of the dead, which he believes is at the end of the river that runs alongside their property.

It’s Christmas and Zip and Zap are up to their old tricks. But this time they’ve gone too far and their punishment will be no Christmas vacation and a seemingly boring boat trip with their parents instead. To their surprise, the destination is a spectacular remote island. But a terrifying storm rolls in and they’re forced to seek shelter at a mansion belonging to the eccentric Miss Pam, where children without families enjoy a paradise with no rules. Helped by their new friends, Flecky, Macky and Pippi, the brothers discover that their parents’ sudden disappearance in the middle of the night is related to the mysterious secret behind the island and its strange inhabitants.

The “Our Gang” type adventures of German working class kids from a Berlin apartment building (number 67) during the early 1930s. With Nazism’s rise, however, their tight-knit group unravels. One leader, Paul, becomes a Nazi. (In a later book of the series, you discover he renounces Nazism and flees to Switzerland.) One, Erwin, resists Nazification. (In a later book, his father takes him to Sweden. He eventually, however, fights for the British.) And the girl, Miriam, who is Jewish, immigrates to Canada. (In a later book, she returns to Europe after the war, where all three comrades finally meet in Geneva to renew their vows of friendship once again.)

Norwegian director Berg takes an unusual approach in this film about a young teen boy: He makes an honest, artistic film with adult production values that actually speaks to kids. The content may seem a bit grown up, but it’s right where these children live! Sometime in the 1980s, Viktor (Evjen), a sharp, perceptive 13-year-old who’s afraid he will never be as cool as his big brother OK (Lauritzsen). His pals (Eidissen and Stigar) seem to feel the same, so they form a band just to get the girls’ attention, even though none of them can play an instrument. Meanwhile, Viktor knows something’s up in his family. His parents (Kokkin and Kolsrud) are not talking to him, while OK tells him secrets he finds hard to believe. Meanwhile, Viktor notices a new girl (Johansen) and gets entangled with the local thug (Rafaelsen) and his girlfriend (Gjertsen). Basically, Viktor knows far more than anyone gives him credit for. And he cooler than all of them put together!
While the filmmaking itself is profoundly un-flashy, Berg captures the story beautifully. This is rich, meaningful cinema–thoroughly entertaining in its use of humour and unexpected adventures to keep us engaged, and then deepening it with a fairly intense examination of family communication (what the film is really about, as opposed to more obvious themes). Why do adults lie and keep the truth from children? Sometimes this is a little heavy-handed, but it’s never sentimental at all, and Berg gets terrific, natural, edgy performances from the entire cast. Evjen is especially good, making Viktor a very intriguing character we like instantly and then learn to respect (he becomes a bit too saintly at the end, but never mind). It’s rare to find a film about children made with this level of integrity and truthfulness; so keep an eye out for it.

Mester Pista exciting adventure filled vacation with his friends. The boy was a regular trip to the attic, where old clothes, furniture, courtesy of the family comes to life in front of an eventful past. So it takes imagination and reality sidelines of a vacation. (google translated)

After moving to Amsterdam, Tygo gives a class talk about Carnival. What starts as a general explanation of the festival, turns into a personal poignant account. Although his father always says that anything goes with Carnival, his father also shows him that even with Carnival, one can go too far. Suddenly, into the poor but happy lower-class Manhattan home of the widow Errol and her son Cedric, aged about 9, comes an agent from Cedric’s mysterious grandfather, the Earl of Dorincourt, asking them to move to England so that Cedric can learn aristocratic ways and inherit the vast estate. Cedric’s mother consents with misgivings, especially for having to live in a house nearby rather than in the castle with her son. The Earl proves to be a penurious misanthrope, hated by almost everyone who knows him. But from the beginning, Cedric sees only good in him, can’t imagine that he would ever treat his tenants and villagers poorly, and wins their hearts with kindnesses, giving all credit to his grandfather’s wishes. Soon the dour old man finds that he loves this cheerful little boy so dearly that he wants to live up to this new image of himself. The sudden appearance of a vulgar, ambitious American claiming that her son is the true heir to the title is a more grievous blow to him than anyone would have thought possible.

Wanting to test her suitor Lubos’s character and his relation to her son Vasek, Anna accepts his offer for her and Vasek to spend summer holidays at his father’s country house. She’s looking forward to family ease and peace, but Granddad, Lubos and Vasek have different plans.