Four boys growing up in Hell’s Kitchen play a prank that leads to an old man getting hurt. Sentenced to no less than one year in the Wilkenson Center in upstate New York, the four friends are changed by the beating, humiliation and sexual abuse by the guards sworn to protect them. Thirteen years later and a chance meeting lead to a chance for revenge against the Wilkenson Center and the guards.

After a prank goes disastrously wrong, a group of boys are sent to a detention center where they are brutalized, physically & mentally. Over 10 years later, they get their chance for revenge.

Barry Levinson’s Adpated Screenplay is Convincing. The film has interesting & absorbing moments in the first hour as well as in the second hour. However, the film gets too intense at times, and the faint-hearted are sure to shy away from those portions. Also, the film is very long. It definitely could’ve been trimmed. Levinson’s direction is skilled. Michael Ballhaus’s Cinematography is good. Editing is okay. Music by John Williams is impressive.

On the whole, ‘Sleepers’ is worth a watch, as it succeeds by holding your attention almost throughout. Thumbs Up! 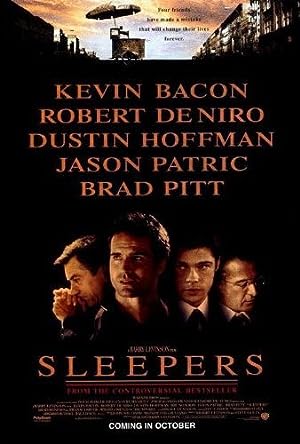