Teenager Ariel lives a seemingly quiet life with his father and sister on their picturesque farm in a rural part of Buenos Aires. However, unbeknownst to his family, Ariel has been abused for years by Omar, his neighbourhood priest. Having confused his mistreatment for romantic affection, Ariel takes it upon himself to free himself from their relationship and soon embarks on a secret affair with one of the male workers on his father’s property. Meanwhile, as Omar continues to succumb to his urges, he forms a friendship with a much older priest who finds himself wrestling with similar desires. Defiantly unsentimental in its approach, José Celestino Campusano’s richly textured exploration of sex, power and ecclesiastical abuse in Argentine society is a complex and often confrontational piece of work, posing many tough questions without resorting to easy answers. 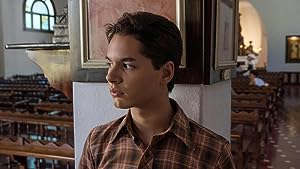 One Response to Men of Hard Skin 2019