Set against the backdrop of an underground, bohemian London, Kids In Love offers a new take on the traditional coming of age story. Drifting through his gap year with internships and travel plans, Jack (Will Poulter) has always suspected there was more to life than this. A chance encounter with the beautiful and ethereal Evelyn (Alma Jodorowsky) and her friends, including free spirited Viola (Cara Delevingne), swerves his life radically off course. She is like no one he’s ever met before, and he quickly becomes caught up in a whirlwind of all-day parties and wild nights in London’s hidden dives with her charismatic friends. Giving up everything to follow Evelyn and her hedonistic lifestyle, it takes Jack a while to realise what he’s leaving behind, that love isn’t a game you want to lose and that these people might not be the kindred spirits he first thought.

What better contrast to those urban gritty dramas about young Londoners set in the tower blocks than Kids in Love which is about posh young Londoners living in Notting Hill or similar.

Will Poulter plays college student Jack taking a gap year, do some work and earn money to travel to south America with his friends.

Like a lot of teenagers he is unsure of what he wants to do with his life but he certainly does not want to do an internship in a law firm that his father has arranged.

What he does engage in is a bohemian lifestyle partying in London, taking drugs and having sex and falling out with his friends, because now he does not want to go travelling. This turn of events is caused by meeting French free spirited artist Evelyn (Alma Jodorowsky) who lives in a rundown Hackney townhouse with other alternative arty types such as Viola (Cara Delevingne) and Evelyn also has an on/off boyfriend who also might be a drug dealer.

Refreshing as it might be to see a different perspective of Londoners (the white middle class type.) There is little drama and little that happens in this coming of age tale where Jack’s loyalties with his friends are tested. A good natural performance from Will Poulter is the only recommendation in this empty story. 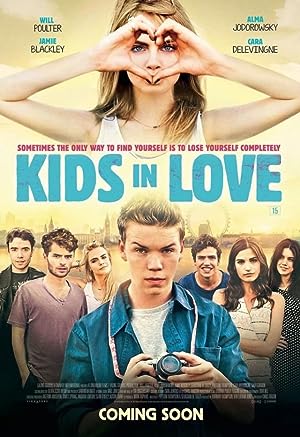