BOYS is a story about two best friends on the first day of summer. Set in 1999, Brian sleeps over at Jake’s house as they have done countless times before. This night, however, the two encounter new sides of themselves. Overwhelmed by the discovery, Brian decides to walk back home as he is facing a whole new path in his life. It is a story about desire, adolescence, and the realization of being different.

Greetings again from the darkness. The opening sequence is somewhat surprising and even a big shocking in its depiction of three adolescents (2 boys and a girl) running through the sprinklers in the front yard of a suburban home in Anyplace, USA. What, in the past, would have seemed totally normal for kids, is anything but in these days of video games and cell phones.

Writer/director Eyal Resh follows the two boys as they crack themselves up with prank phone calls, negotiate with parents for a sleepover, and partake in typical rough-housing. This isn’t Richard Linklater’s Boyhood timeframe, as the entire 13 minute run time takes place over well under 12 hours. After all the usual shenanigans, an element of curiosity and self-discovery leads to confusion over attraction and feelings. Of course, some boys twice their age still haven’t figured out how to deal with emotions, and these boys have no capacity for understanding.

Wyatt Griswold plays Brian and Pearce Joza plays Jake. The two young actors handle the material with aplomb. They convince us quickly of their friendship and help us feel their confusion. It’s a very effective short film. 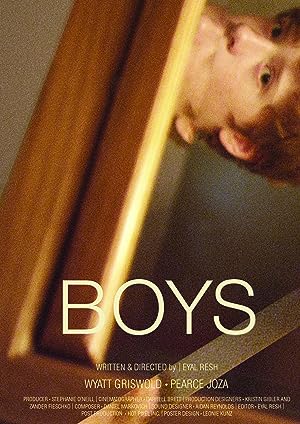